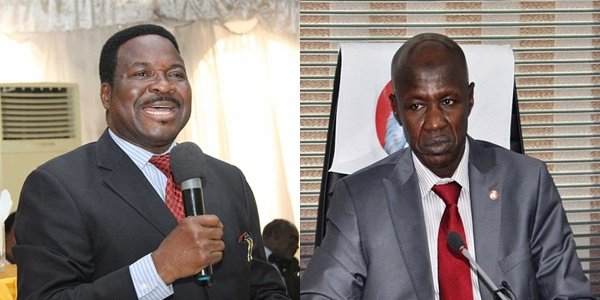 Senior Advocate of Nigeria (SAN) Mike Ozekhome and Senior Law lecturer, Wahab Shittu have disagreed on the Federal Government’s anti-corruption efforts and its handling of recovered proceeds of crime, including forfeited assets.

Ozekhome accused the government of disregarding constitutional provisions on rights protection and being selective in its supposed fight against corruption.

He argued that suspended acting EFCC Chairman, Ibrahim Magu was currently experiencing the sought of treatment he had subjected others to, while he claimed to be fighting corruption.

Shittu, who is Magu’s lawyer before the Justice Ayo Salami (rtd)-led Presidential Committee currently probing the EFCC, disagreed with Ozekhome and contended that Magu did no wrong as nothing has been found against him.

He argued that rather than criticising the anti-graft efforts, everyone should join hands with the government to ensure an efficient and effective process that guarantees the interest of all.

“We should all come on board in designing an effective and efficient legal framework for the management and disposal of seized and confiscated assets in our country,” he added

Ozekhome and Shittu spoke in Abuja on the theme: “Judicial updates and legislative developments on economic crimes and forfeiture of proceeds of crime,” at the on-going 3rd Annual Criminal Law Conference of the Rule of Law Development Foundation (RLDF).

Shittu faulted the 22-man committee recently inaugurated by the Attorney General of the Federation (AGF) and Minister of Justice, Abubakar Malami to dispose of assets forfeited to the Federal Government, arguing it is inconsistent with constitutional and statutory provisions.

“Clearly, it’s the statutory responsibility of the EFCC under the EFCC (Establishment) Act 2004, a creation of the National Assembly, to carry out the actual disposal of all forfeited assets secured through valid final orders of the court.

“For the avoidance of doubt, Section 31: (1) and subsections (2), (3), (4) and (5) on Final Disposal of Forfeited Property of the EFCC (Establishment), Act 2004, are very clear and unambiguous on how forfeited properties can be sold.

“What is left is to humbly request the HAGF (Attorney General of the Federation) to either propose an executive bill to amend the EFCC Act 2004 before inaugurating the committee and instantly disband the Day Apata SAN-led committee for being in contravention of the law.

“Interestingly, one of the reasons my client, Ibrahim Magu is being probed by the Justice Salami-led Judicial Commission of Inquiry is for alleged failure to follow the law in the disposal of forfeited assets. This allegation is part of several other allegations against Magu, which collapsed during the proceedings.”

Shittu urged that National Assembly to urgently pass the Proceeds of Crime Bill to help harmonize and consolidate existing legislative provisions on the recovery of proceeds of crime and related matters in Nigeria.

“This is essential with a view to addressing the problem of lack of transparency and accountability associated with the management of recovered funds by anti-graft agencies in the country. There appears to be a lack of clarity in addressing this strategic problem in the country currently,” he said.

On how the country could make headway in the fight against corruption, Ozekhome called for the sincerity of purpose on the part of the FG, which he accused of being discriminatory in its approach.

He called for the scrapping of the Presidential Advisory Committee Against Corruption (PACAC), which he claimed is one of those clogs in the wheel of progress in the government’s anti-corruption efforts.

Ozekhome asked the government to stop appointing police personnel to head the EFCC and to discard the current “obnoxious practice of naming and shaming” those accused of corruption.

He added: “The giving and taking of money is a lesser form of corruption when you compare it with favouritism, nepotism, sectionalism in recruiting certain people to the disadvantage of the other contrary to chapter two of the Constitution.

“In a government where the entire security architecture of the country resides in one section of the country, and then, you are talking of corruption? What corruption can be worse than that?”