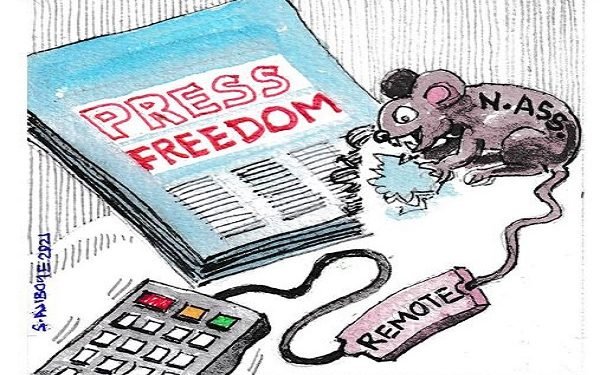 Even as Attorney General of the Federation (AGF), Abubakar Malami, continues to study the Economic Community of West African States (ECOWAS) Court’s interim injunction against Nigeria prosecuting those allegedly contravening the suspension of Twitter, paths continue to cross as the mainstream media goes through its toughest and most unprecedented trial in a democratic era. The government has, for a long time, stroked its beard in thoughtful consideration of how to further shackle the Nigerian media already ranked as one of the least free in the world. The media earned this attention by simply acting as it should in a democracy. It may be the voice of democracy, but it remains one of the oldest and most dauntless foe of tyranny and those given to arbitrary display of power. The question then arises; “what has tyranny to do with the current administration?”

By the dictates of Sections 4, 5 and 6 the 1999 Constitution the country’s administrative powers are shared between the Executive, Legislature and Judiciary. The administration of the country is the duty of all these three arms of government, and it is from the legislature that one controversial bill, which seeks to amend the Nigerian Press Council Act, emanated. This bill gratuitously grants the media an endangered status thereby making the country’s democracy to rock on its heels. The sponsor of the bill, which among other things encroaches on press liberty, is Hon. Olusegun Odebunmi from Oyo State. Although he did the spade work, the opinion of the public is that he is a stooge of government. It is believed that the presidency is behind it, but presidential spokesman, Femi Adesina, has denied that. No one is convinced. In fact, it is thought to be a harsher and more dangerous variant of the notorious Decree 4 of 1984 authored by the Muhammadu Buhari military government when he unwisely tampered with the press as he promised. Old habits, Nigerians have begun to suspect, die hard.

The lawmaker, meanwhile, brimming with inexplicable confidence of suspicious origin, declared to general chagrin that no court of law could stop the Bill. The implication of this statement is that he does not believe that the jurisdiction granted to the courts by virtue of Section 6(6)(c) of the Constitution with respect to the resolution and adjudication of matters between the government and the people holds any water over his Bill despite the outcry that the Bill flies in the face of Section 39 of the Constitution. Section 39 of the constitution provides “that every person shall be entitled to freedom of expression, including freedom to hold opinions and to receive and impart ideas and information without interference.” It continues that “every person shall be entitled to own, establish and operate any medium for the dissemination of information, ideas and opinions: provided that no person, other than the Government of the Federation or of a State or any other person or body authorized by the President on the fulfilment of conditions laid down by an Act of the National Assembly, shall own, establish or operate a television or wireless broadcasting station for, any purpose whatsoever.” That fundamental right is however derogated by Subsection 3, which notes that nothing in Section 39 shall invalidate any law that is reasonably justifiable in a democratic society for the purpose of preventing the disclosure of information received in confidence, maintaining the authority and independence of courts or regulating telephony, wireless broadcasting, television or the exhibition of cinematograph films; or imposing restrictions upon persons holding office under the Government of the Federation or of a State, members of the armed forces of the Federation or members of the Nigeria Police Force or other Government security services or agencies established by law.

Fundamental human rights are contained in Chapter 4 of the 1999 Constitution and are derogated mostly by Section 45 of the Constitution. But that derogation must be by a law that is reasonable in a democratic society. Any infringement on the freedom of the press can be a debilitating factor to democracy. For many years, Nigerians have observed that the Nigerian Judiciary is not independent because the president has the duty of ratifying appointments therein. To add the media into this slavish cocoon would be to sentence Nigerian democracy to perdition.

According to Section 3 of the Bill, “The Council shall be charged with the duty to regulate the print media and related media houses; ensure truthful, genuine and quality services by print media houses and media practitioners; with the approval of the Minister in charge of information, establish and disseminate a national Press Code and standards to guide conduct of print media, related media houses and media practitioners; approve penalties and fines against violation of the Press Code by print media houses and media practitioners, including revocation of license; receive, process and consider applications for the establishment, ownership and operation of print media and other related media houses; with the approval of the Minister, grant print media and other related licenses to any application considered worthy of such; monitor activities of the press, media and other related houses to ensure compliance with the National Press Code for professional and ethical conduct, including the Nigerian Union of Journalists; serve as national consultant on any legislative or regulatory issues on media and related issues; research into contemporary press and media development and engage in updating press documentation and freedom; foster the achievement and maintenance of high professional standards by the press; review developments likely to restrict the supply through the press, of information of public interest and importance or which are liable to prevent free access of the press to information and advising on measures necessary to prevent or remedy such development; ensure protection of the rights and privileges of journalists in the lawful performance of their professional duties; enquire into complaints about conducts of the press and the conduct of any person(s) or organization(s) towards the press and exercising in respect of the complaints the powers conferred upon it under this Act; carry out such other activities as are necessary or expedient for the full discharge of all or any of the functions conferred on it under this Act.” Put mildly, even an outright fascist government would wince to make this kind of law.

The Press Council, which the Bill sees to vivify, is antithetical to democracy, for it seeks to do more than it claims, which is to regulate the press. The wordings of the Bill mean that part of its functions will be to dictate who becomes a journalist and even to regulate what is defined as truth. Had this been an independent body set up by members of that profession – the fourth estate – it would have been a different matter, though no less objectionable; but the Bill proposes that the chairman of the Press Council be appointed by the president. Indeed, the proposal to set up such an anti-democratic council is reminiscent of the autocratic behaviours of dictatorial governments. Every abuse and arbitrary use of power is predicated on either the assumption of an ad infinitum occupation of the office wherein that power stems from or from the presumption that the abuser of power thereof has the capacity to waive justice for the grief caused.

“Power tends to corrupt and absolute power corrupts absolutely,” said Lord Acton. “Great men are almost always bad men, even when they exercise influence and not authority: still more when you super add the tendency or the certainty of corruption by authority. There is no worse heresy than that the office sanctifies the holder of it. That is the point at which the end learns to justify the means.” In this, Lord Acton spoke no fallacy but one in the above quote credited to him, and that one fallacy may be itself the result of either a malapropism or the peculiarity of the Nigerian political sphere. Nigerian leaders, the country agrees, are not necessarily great men although they should be. To the contrary, historical precedence brings it home to the public that a good number of those who have journeyed through positions of power in Nigeria were self-serving individuals who freely and without charity looted the country into penury without the establishment of a philosophical, ideological or political legacy worthy of international commendation and merit.

Nonetheless, he is right. Political scientists measure the viability of political structures often through the lens of political institutions and then through the behaviours of those who occupy political offices. Herein the constitutions of most democracies, Nigeria included, provide the people with a remedy for bad governance – tenureship. An errant member of government may be impeached or recalled, and this medicine may be the cure to Hon Olusegun Odebunmi ailment and excesses. The ailment is undoubtedly caused by the false assumption of power, and it primarily afflicts democracies, but may be found upon inspection lurking in other systems of governments. It is symptomized by the sponsorship of frivolous bills even where the sponsor has no experience or training in the subject matter of the bill. The affliction may cause the sufferer to declaim scornfully that statutorily constituted methods of redressing or adjudicating administrative monkeyshines will come to naught. The remedy is simply to strip the wielder of such power of their authority.

Gumi again, and for wrong reasons

For his unguarded prattling on the Nigerian Army’s involvement in banditry, Sheikh Ahmad Gumi was, on Friday, given a long overdue invitation by the Department of State Service (DSS) to their Kaduna premises. The belated but nonetheless valid invitation of the Islamic cleric followed months of repeated, unwanted and offensive interventions on matters of national security; a matter he is too involved in to speak circumspectly on with any objectivity or depth. He has insisted, however, that he was not invited or questioned by the DSS. About four months ago, he was of the opinion that the bandits should be granted amnesty. He has been known, in fact, to advocate for the bandits saying that they were the real victims and that those who referred to them as bandits were the true bandits. This has, of course, meant that he is now an authority on negotiation with bandits.

It remains to be seen what will become of this invitation, if indeed it was made. His understanding of justice, myopic as it is, was allowed to roam freely for a long time unchecked, and only when it hit the Nigerian Army was he reined in. His insensitive statements and suspicious approach to the delicate and frustrating matter of banditry went for a long time unattended. Beyond grilling him over his liberal allegations of army complicity in banditry, even though he claims his allegations were misinterpreted, it is hoped that the DSS will also glean enough information from the cleric to enable the authorities knock banditry into a cocked hat.