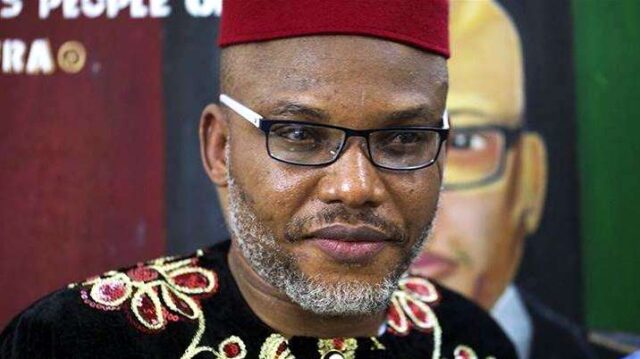 SIR: Nnamdi Kanu’s case, just like that of the Ogoni Nine is purely a presidency affair, but, it must also be said that the execution of the bench warrant issued against Kanu for jumping bail by the court of law is in order.

Though the right to self-determination is internationally recognised, but the agitation to enforce such right must be done within the ambits of the law. However, Nnamdi Kanu has taken his agitation beyond the realm of the law. First, he placed a N100m bounty on the head of the governor of Rivers State, Nyesom Wike to be given to anyone that can kill him. Not done, he called on his followers in the Southeast to be killing and maiming people. These amongst other activities being carried out by and individual who had jumped bail are serious offences.

I believe his arrest is inevitable in order to curb his activities and maintain sanity in the country, most especially the southeastern part of the country. But what I have been able to realise while studying the chain of reactions since the arrest of Nnamdi Kanu is that the Nigerian people have lost the confidence they are expected to have in this administration. The country has never been this divided!

To read that some persons could condemn the arrest of someone whose utterances have cost the country scores of lives and properties while citing the inability/failure of the federal government to put an end to the activities of blood-sucking herdsmen shows that we have lost it as a people. On the other hand, that those in positions of authority have failed to come to terms with the fact that the tail does not wag the dog is most regrettable. It shows that they are out of touch with reality.

It is most pathetic that the president has done nothing to change the perception to the entire world that he is pro-Fulani and that he will do everything to protect their interests without considering the fact that ours is a heterogenous country. As it stands today, President Buhari is distant and too disconnected from the people.

History has afforded the president the opportunity to write his name in gold, but, with all indications, it seems he has chosen to write it on marble of infamy. It is not too late for him to enthrone social justice, equity and mutual religious and inter-ethnic tolerance and respect in order for the people to have respect in this government, and, this include paying critical attention to the call for restructuring as that will help re-engineer the weak fabric of Nigeria.