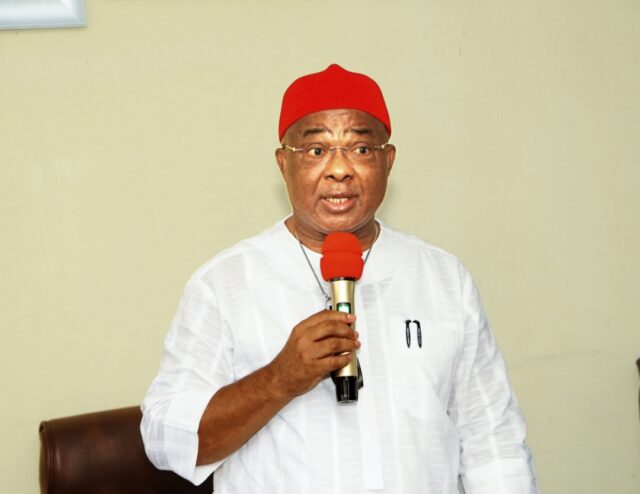 
Governor Hope Uzodimma could not have been under any illusion that he would receive accolades from so-called opposition elements in the state, for superintending over a programme that is currently empowering 15,000 youths in the state.

One, the sheer number of young men and women that are benefiting from the programme, in one fell swoop, certainly offers leverage for any party or administration in power and would naturally cause a big discomfiture to those in opposition.

Two, those currently in opposition are too fixated to appreciate such things. The empowerment programme came at a point when the opposition seems to have run out of fire power, following Governor Uzodimma’s sterling performance in some areas that hitherto gave the former the ammunition to hit at him.

Suddenly, salaries and pensions have ceased to be the main talk in radio stations in Imo, agreed that there are still a few grey areas; and we know the reason.

We no longer read snippets on the social media where patronized rascals haul abuses on the governor for the traffic logjams at the Ware House junction, along bank road, Owerri; at the Fire Service junction along Egbu road, Owerri etc; and we know the reason.

The Nekede-Ihiagwa road, from the Owerri-Aba highway, has since ceased to be an issue; and we know the reason. In the last one month or thereabout, the so-called opposition does no longer have “unknown gun men” to cheer and clap for; and we know the reason. Then, suddenly came this empowerment programme for a whopping 15,000 youths. What happened? How manage?

Let me hasten to state that the opposition, particularly the Peoples Democratic Party (PDP) in Imo state, perhaps for the first time, showed some rigour by making enquiries on the “source” of the money – the N4billion or thereabout with which the 15,000 Imo youths are being empowered.

But going by the language of some of its handlers, the party’s worry is not the source. Its worry is that Governor Uzodimma had the temerity to want to “score cheap political points … and portray himself as having been accepted by Imo people…”, a veiled reference to the fact the benefiting youths, their families and, indeed, a great majority of Imolites, have scored the governor very highly on that. Such an attitude amounts to a blackmail not only on the beneficiaries but the totality of Imo youths who, as against the party’s insinuations, should not be forced to see the gesture from the narrow prism of partisan brinkmanship.

I have also come across write-ups by some insiders of the party who claim that “the money was supposed to be N500,000.00 per applicant. But now Uzodimma has reduced it to N250,000.00 and the 15,000 applicants they are parading is total hoax”.

As far as I am concerned, this amounts to painting the benefiting youths in bad light and portraying them as most undiscerning.

The authors of the passage quoted above did not disclose their source and as I write, none of the beneficiaries has come up to collaborate that claim by the party men in PDP. Clearly, the allusion to “a total hoax”, is an assault on the collective integrity of the 15,000 youths whose names appeared in black and white, complete with their telephone numbers, in a 128-page booklet released at the venue of the empowerment exercise on June 12, 2021.

A good and purposeful opposition would have by now come up with evidence to show that the names that appeared in the booklet and their respective phone numbers, as published, do not correspond in the records of the service providers. But nothing like that has happened.

At the occasion, penultimate Saturday, two beneficiaries were on set, in the full glare of national and international television, to acknowledge, on behalf of themselves and the rest of their colleagues, that they dully participated both in the skills acquisition programme that preceded the launching of the scheme and the selection process, itself.

It is quite unfortunate that party men in the PDP would assume the role of a mouth piece for such a number of brilliant, able bodied young men and women most of who have post graduate degrees.

In my view, Imo youths, on the whole should repudiate this tendency of using their plight as an instrument for advancing partisan cause and fester acrimony in the polity. As far as I am concerned, it is an insult to Imo youths, generally, to suggest that somebody published their names in a document just for the purposes of fleecing the state of N4billion. And I believe those – the youths – concerned know what to do.

Furthermore, attempting to drag the youths into the debate over who, between the federal and state government, brought the money with which they are being empowered is to subject them to an undeserved harassment and make a caricature of them.

In any case, the debate is academic, since either way, that is, whether federal or state, the empowerment is coming from two levels of government controlled by the same political party; the reason why the PDP attitude to the programme is more of a reactionary partisan misadventure than a genuine effort to protect the interest of the youths.

The same way the bailout fund allegedly developed wings in 2016 would have been the same way the N4b would have disappeared in 2021. In any case, at what point did the party men in PDP realize that N4b belonging to the federal government was to be shared in Imo state? Was it not after the Imo state government made the matter public and began to give notice of the June 26, 2021 event through the media? I think Imolites deserve something better than this type of a lazy man’s approach to opposition.

It is sheer naivety to believe that the federal government would pick quarrels with Governor Uzodimma for announcing the programme with fanfare, and maximizing its demonstration effect on the people. In a situation where the same federal government is being pilloried by the same PDP, is it reasonable to expect state governments in the same party as Abuja to squeeze 15,000 youths in a room and say, “take but let no one hear about this?” Wouldn’t the “opposition” have accused the governor of handling the matter secretly so that he could pocket part of the money?

Therefore, is it reasonable to believe or expect that other states government or their governors would not like to also go to town to announce the empowerment of 15,000 youths in one fell swoop, no matter where the money is coming from?

When last I checked, Imo was among the very few states that have carried out the youth empowerment programme, with or without fanfare.

In other words, assuming, without conceding, that it is an entirely federal government-funded programme, does it not say a lot about the current administration; that Imo state is one of the few that could successfully go through the rigorous processes, obtain the funds and proceed to make them available to indigenes of the state? Before now, one of the major causes of low infrastructural development in the state was the inability of successive administrations to develop the necessary skills and flair to source or attract funds from donor agencies.

In the last but one administration, funds from sundry potential sources were never accessed due to lack of the necessarily technical knowledge on the part of those at the helm of affair then, even when such funds were low hanging fruits.

This is where the rest of the state must come in to halt this drift of subjecting every issue to ludicrous partisan interrogations as in the instant case.

Today, we are witnessing in the state allegations and counter allegations of “politicizing every issue”. As far as I am concerned, something more frightening appears to be in the making; which is the likelihood of a fierce struggle, among party men and their parties, over whom and which will be the first to corner the youths, enchant them with hate-filled stereotypes and thereafter put them to sinister uses in the struggle for power.

That was what we were witnessing when party men were cheering young men who were attacking the homes of their political opponents with guns.