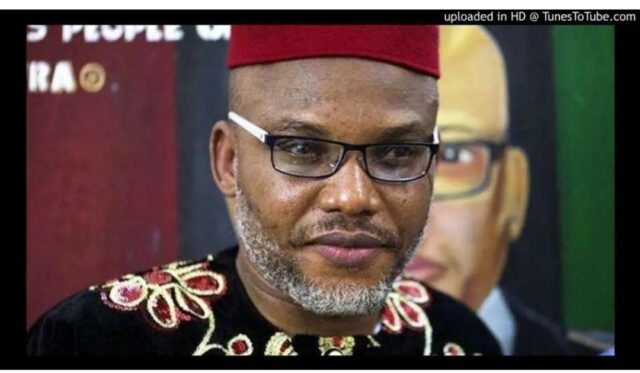 Uchechi Okwu Kanu, the wife of Biafra political activist, Nnamdi Kanu, has identified Dominic Raab, the Secretary of State for Foreign, Commonwealth and Development Affairs of the United Kingdom (UK), as the only person who can save her husband from punishment by Nigerian authorities.

It will be recalled that Kanu is currently in the custody of the Department of State Security Services, DSS. He is facing several charges including treasonable felony which carries the death sentence.

According to her, Raab “can end all of this in an instant”.

“Only the British government can prevent him (Kanu) from being subjected to further harm. My family’s future happiness rests with Dominic Raab. He can end all of this in an instant. He can stop my nightmare,” Guardian UK quotes Uchechi as saying.

The family of Kanu are accusing the UK government of abandoning him adding that he is being ‘detained illegally’ and at ‘risk of torture’.

Kanu, founded and leads the now-outlawed Indigenous People of Biafra (IPOB). He fled Nigeria in 2017 while on bail after soldiers reportedly attacked his family home in Abia State, South-East Nigeria.

Uchechi is threatening a judicial review against Raab, over an alleged “failure” to provide consular assistance.

Although the government has requested access to Kanu, his family said it must act with urgency, claiming his life is at risk. She said her last contact with her husband was on 18 June, when her five-year-old son sent him a Father’s Day card, and Kanu said he would call after some meetings but never did.

“He’s upset that he hasn’t heard from his dad and he does not understand,” she said.

In 2015, Kanu was arrested in Nigeria and charged with terrorism offences and incitement, after airing broadcasts calling for secession on a digital radio station, Radio Biafra, which he founded at his home in London.

POLITICS NIGERIA understands that Bindmans LLP, a multi-disciplinary London law firm, have sent a pre-action letter on behalf of the Kanu family to Raab, challenging his ongoing failure to provide consular assistance to Kanu.