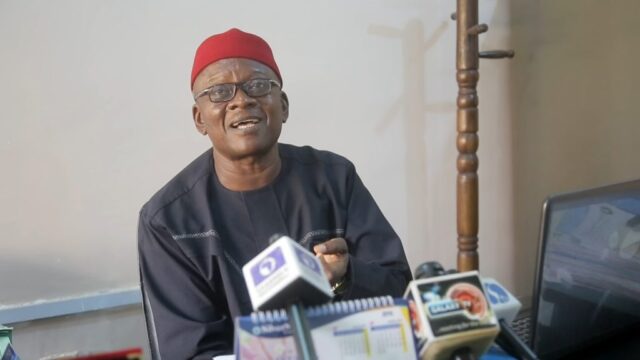 While some party faithful may have spoken favourably to the just concluded APC Congresses across the States, the story may not be so in some Imo communities after all.

The former Commissioner of Information in Imo State under Rochas Okorocha regime, Prof Vitalis Orikeze Ajumbe, has kicked against the conduct of the APC Ward Congress in Ikeduru Local Government Area.

He accused Prince Charles Amadi (Chavon) of manipulating the ward congress in Ikeduru, alleging that Chavon imported non APC members to participate in the process.

Speaking to newsmen in Owerri, where he expressed disenchantment with the outcome of the Congress, Ajumbe said Chavon reccruited persons, who had nothing to do with the APC, to come and be part of the Congress, in all his bid to hijack the exercise.

He said Chavon’s action, is part of his desperation and plot to foist his son, as candidate of the APC for Mbaike Federal House of Reps seat in 2023.

According to the APC chieftain, Chavon’s action is also part of his grand design to disregard the directives of our Governor, Distinguished Senator Hope UZODINMA and also to humiliate our son, the State Deputy Governor, Prof Placid Njoku, who is the undisputed leader of the APC, in Ikeduru Local Government Area.

He said any list of from Chavon, containing ward executives from Ikeduru LGA, without the input of other APC leaders such as the Deputy Governor, himself, Dr. Uzoma Obiyo, Innocent Ikpamaezie, and other leaders of the party in the area, is unacceptable and would be resisted by stakeholders of the party.

His words “Chavon is desperate to have his son go to the House of Representatives, and he is going about in such an unacceptable manner by resorting to underhand actions inimical to the party.

” He cannot circumvent the process of electing APC ward executives in Ikeduru and hijack the process. We will resist that. It is unacceptable to me and majority of party leaders.

“We will also resist his attempts togo against the directives of the Governor of Imo State Distinguished Senator Hope UZODINMA and also to humiliate our son, the Deputy Governor, Prof Njoku, who is the leader of the party in Ikeduru LGA” he stated.