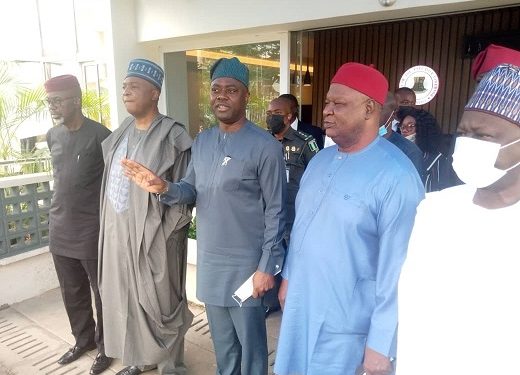 The National Reconciliation Committee of the Peoples Democratic Party (PDP) has arrived in Ibadan, the Oyo State Capital city.

××
The committee is led by former Senator President Bukola Saraki.

Upon arrival in Ibadan, the committee was received at the Oyo State Government Secretariat, Agodi by Governor Seyi Makinde with top government functionaries.

Shortly after the arrival, the visitors were led to the Governor’s courtesy room where a closed-door meeting was held for about an hour.

Others members of the committee in the train of Saraki include another Ex-Senate President Anyim Pius Anyim and former Cross River Governor Liyel Imoke among others.

It was gathered the meeting was to facilitate talks and discussion among aggrieved members of the party in the state.

The crisis rocking the Oyo chapter of the PDP deepened when a faction recently opened a secretariat close to the Agodi state secretariat.

As at the time of filing this report, the committee is in a closed-door meeting with some aggrieved members of the party in the state.

Makinde, while leading the visitors out of the Governor’s office, en route the venue of the closed-door meeting, assured reporters the committee would brief the press at the end of the meeting.

He said there are series of talks but the outcome would be communicated at the end of all meetings.

Some others, it was also gathered, are scheduled to meet the committee at Carlton Gate Hotel.