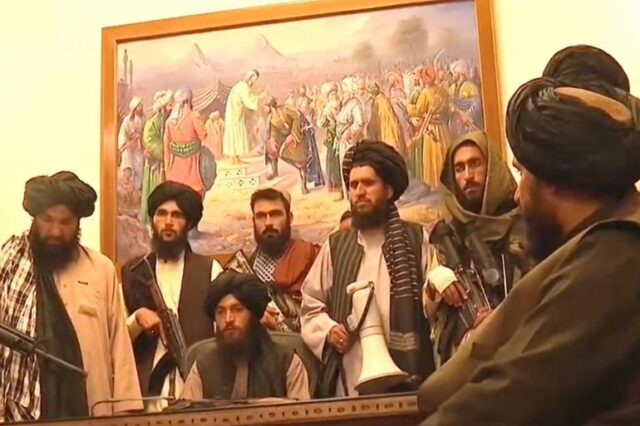 The presidential palace in Kabul has now been “handed over” to the Taliban, according to the Al Jazeera network.

It was vacated just hours ago by government officials, including former President Ashraf Ghani who has fled the country.

According to the Al Jazeera network, which broadcast scenes of the Taliban live from the palace, one of the Taliban officials said that Kabul was a different city to the one they left 20 years ago.

“Securing Kabul is a huge responsibility. It’s different from the city we left 20 years ago,” Al Jazeera reported, quoting the Taliban official at the palace.

The Al Jazeera correspondent at the palace reported that three Afghan government officials were present for the palace “handover” to the Taliban.

A Taliban security official then said that “no blood was shed in the handover.” He also said there is a “peaceful handover of government facilities ongoing across the country.”

One of the Taliban officials also said that they want an all-inclusive government in Afghanistan.

He further said that Taliban leader as well as two of his deputies are now in Afghanistan and that they will come to Kabul when the security situation improves.

Another Taliban member present for the ceremony, spoke briefly in English to say he had formerly been held by the US in Guantanamo.

The Taliban was making empty promises leading up to the US withdrawal from Afghanistan, CNN’s chief international anchor Christiane Ampour reported.

“Most analysts who understood what was not happening in Doha, i.e. peace talks that were meant to engineer some kind of proper transition from one US-led force to the Afghans, didn’t pay off. The Afghan Taliban continued to fight on the ground while they continued to make empty promises to the United States in Doha, Qatar,” Amanpour told CNN’s Fredericka Whitefeld Sunday.

Amanpour noted that the Afghan Taliban’s efforts to gain control in the country are “very similar to what they did back in 1996, and the 90s, when they also stormed in and by and large took most of the cities, including Kabul, without a fight.”

“I think you’ll probably see history describe this as a day that will live in infamy. You have in 20 years, and fast approaching the anniversary of 9/11, the very reason for the United States to enter Afghanistan and to correctly push back Al Qaeda and the Taliban which attacked the homeland, has now been completely and utterly handed back to the Taliban. They have been handed back, by the United States’ rapid withdrawal, the land of Afghanistan. And I think what you’re hearing from a lot of American military is a deep sense of regret. A deep sense that this perhaps did not need to happen,” she said.

The UAE MFA also tells CNN that they are working on evacuating diplomatic staff from France, the United Kingdom, the European Union, Canada, Australia, the Office of the United Nations Food Program, the United States, Germany, and Egypt.

UAE MFA said several aircrafts “from a variety of nations” are departing from Kabul airport on Sunday and are due to arrive to the UAE Sunday night and Monday morning.

A spokesperson for the Taliban, Zabihullah Mujahid, said that flights in and out of the airport will be allowed to proceed as normal. There has been no Taliban effort to take the airport. “We assure all embassies, diplomatic missions, institutions and residences of foreign nationals in Kabul that there is no danger is posed to them,” Mujahid said in a statement on Sunday.

Here’s how the Taliban regained control in Afghanistan

After 20 years of US intervention, thousands of deaths and at least $1 trillion dollars, the Taliban’s advance in the country has been strikingly swift — here’s a look back at how the situation evolved to where it stands today:
Less than a month after terrorists linked to al Qaeda carried out the 9/11 attacks, American and allied forces begin an invasion of Afghanistan called Operation Enduring Freedom, to stop the Taliban from providing a safe-haven to al Qaeda and to stop al Qaeda’s use of Afghanistan as a base of operations for terrorist activities.
On Dec. 7, 2001 the Taliban lost its last major stronghold as the city of Kandahar fell. Since then, the Taliban have attempted to gain ground in Afghanistan throughout the time US forces have been there and throughout multiple US administrations.

More recently, in January 2017, the Taliban sent an open letter to then-newly elected US President Trump, calling on him to withdraw US forces from the country.

Between 2017 to 2019 there were attempts at peace talks between the US and the Taliban that never finalized into an agreement.

During a surprise trip to Afghanistan in November 2019 for a Thanksgiving visit with US troops, Trump announced that peace talks with the Taliban were restarting. The peace talks resumed in Doha, Qatar, in December of that year.

The US and the Taliban signed a historic agreement in February 2020, which set into motion the potential of a full withdrawal of US troops from Afghanistan. The “Agreement for Bringing Peace to Afghanistan” outlined a series of commitments from the US and the Taliban related to troop levels, counter terrorism, and the intra-Afghan dialogue aimed at bringing about “a permanent and comprehensive ceasefire.”
In the month following the signing of the Trump administration’s peace deal with the Taliban, the insurgent group increased its attacks on America’s Afghan allies to higher than usual levels, according to data provided to the Pentagon’s Special Inspector General for Afghanistan Reconstruction.
In August 2020, Afghanistan’s grand assembly of elders, the consultative Loya Jirga, passed a resolution calling for the release of the last batch of some 5,000 Taliban prisoner, paving the way for direct peace talks with the insurgent group to end nearly two decades of war. The release of the 400 prisoners was part of the agreement signed by the US and the Taliban in February.
In March 2021, Afghan President Ashraf Ghani and the Biden administration proposed to the Afghan government that they enter into an interim power-sharing agreement with the Taliban.

In April 2021, President Biden announced that the US would withdraw forces from Afghanistan by September 2021.

In August, just months after the US began withdrawing forces, the Biden administration sent in 5,000 troops into Afghanistan after the Taliban began gaining control in the country.

On Aug. 15, after the Taliban seized control of every major city across Afghanistan, apart from Kabul, in just two weeks, the Taliban engaged in talks with the government in the capital over who will rule the nation.

The Taliban is now edging closer to taking full control of the country and have seized the presidential palace in Kabul after President Ghani fled the country. Earlier talks to form a transitional government appear to have been scuppered by Ghani’s departure.
CNN’s Clarissa Ward, Tim Lister, Vasco Cotovio, Angela Dewan, Mostafa Salem and Saleem Mehsud contributed reporting to this post.