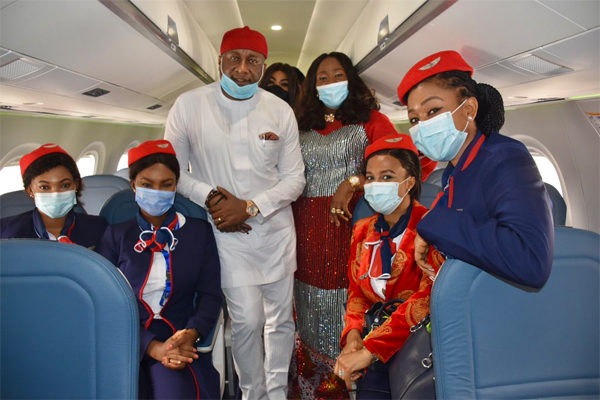 Ugochukwu Onyema , the Chief Executive of Air Peace has called on all and sundry to work hard towards sustenance of the Unity of Nigeria.

Onye made the call, Tuesday, in Ibadan during inaugural flight of Air Peace Airline at Ibadan airport.

He stressed that there was need for every citizen to work toward sustaining the unity of the country, saying Nigerians don’t have any other country.

“Likewise, I want everyone of us to take Nigeria same way; we can jointly and collectively address our shortcomings peacefully as a nation,’’ he stated.

The CEO further charged Nigerians to contribute their quota to the oneness and unity of the nation through individual actions.

Onyema commended Gov. Seyi Makinde of Oyo State for attracting investors to the state, stressing that the inaugural flight was the product of the governor`s efforts.

In his remarks, Makinde said his administration would continue to upgrade facilities at the Ibadan airport till it assume international standard.

Makinde, who also inaugurated the Airport Protocol Lounge rehabilitated by the state government, disclosed that contract for the construction of an aviation fuel facility at the airport had been awarded.

He said the facility would enable airline operators to use Ibadan as their operational base.

The governor said the state would also ensure that the airport serves as an immediate alternative to the Lagos airport in case of weather or other challenges.

The governor expressed optimism that the commencement of air flight operations by Air Peace airline at Ibadan, would promote the economy of the state.

The Airport Manager, Mrs Tega Aiyenuro, said the Ibadan airport, been the only airport close to the Murtala Mohammed International Airport Lagos, was a viable alternative for flights to any part of the nation and the world.

She called on other airline operators to come to Ibadan airport for business.