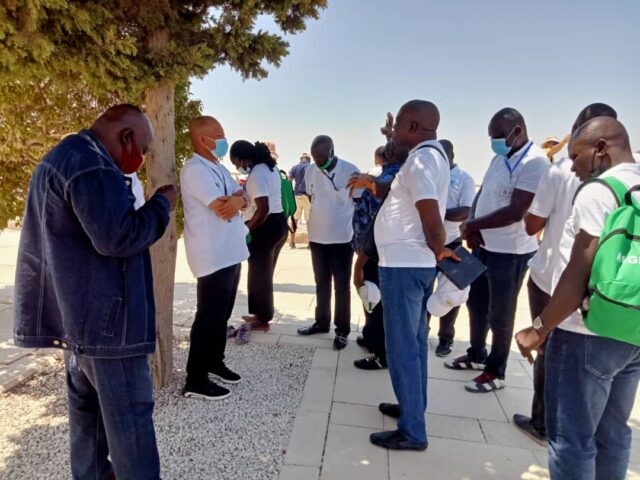 Nigerians on Pilgrimage to Jordan yesterday prayed fervently for God’s divine intervention on the prevailing security challenges in different parts of the country.


The pilgrims, who entered into a covenant with God at Mount Nebo where Moses sighted the promise land, petition God to deliver Nigeria from the hands of her enemies who are bent on destroying the nation.


While praying against the spirit of anger, destruction and disobedience, the Christian Pilgrims noted that life without God is meaningless.


The pilgrims who were divided into various groups prayed for economic prosperity of the nation, youth development and peaceful co-existence in the country.


The Christians also prayed fervently for Nigerians leaders, especially President Muhammadu Buhari, his cabinet and members of the National Assembly for God’s wisdom to lead the country out of the current woes.

A tour guard, Mueen Akroush, who led the pilgrims round Mount Nebo and other Holy sites, gave an insight into the Biblical history of the sites and their imperatives to the present day.


He also led the pilgrims to Hisbon which is widely identified with one of the cities of the Plain, Heshbon due to similarities of their names as captured in Number 21:26.


Akroush explained that “Hisbon formerly ruled by the Amorite King Sihon and the region of central Jordan was referenced in the Song of Solomon 7:3” which says “your eyes are like pools on Hashbon.”


He said that Hisban which was later fortified in the Roman Byzantine period, also called Esbus, was important station on early Christian Pilgrims’ route from Jerusalem to Mount Nebo via the Jordan River.


According to Deuteronomy, Moses ascended Mount Nebo to view the Land of Canaan, which God had said he would not enter and he died in Moab.


Akroush said Moses was buried on the mountain according to Christian tradition, although his place of burial is not specified Deuteronomy 34:6