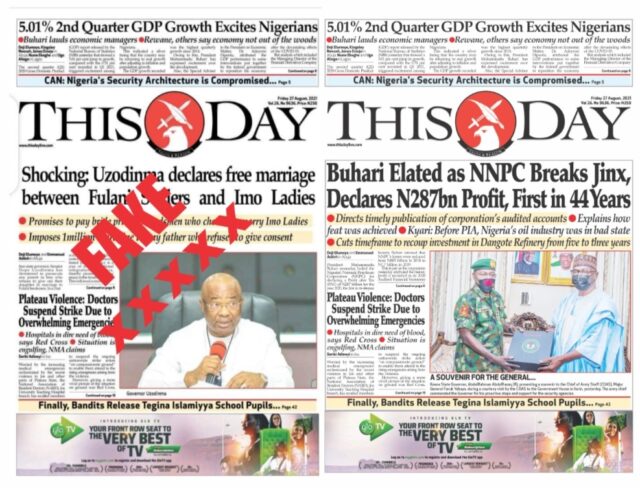 It is not surprising that several accusing fingers are pointing at the direction of the Imo state wing of the Peoples Democratic Party (PDP) as being the sponsors of a fake edition of the popular THISDAY newspaper, wherein Governor Hope Uzodimma was ascribed as decreeing “free marriage between Fulani settlers and Imo ladies” and imposing “one million naira fine on any father that refuses to give consent”.

As expected, the “Imo PDP” joined the fray with a statement in which it claimed that “Imo PDP under the leadership of Engr. Charles Ugwu… does not have time for photo shops and fake news”, and that “it does not need fake news to continue to highlight the misrule of the current integrity challenged (sic) government of Imo state”.

But to be quite candid, I don’t think the Imo PDP needed to bother. Personally, I am reluctant to concede to the Imo PDP the capacity to master mind the cloning because as far as I am concerned, it lacks the sophistication to go into such an intricate matter. It would, therefore, amount to an undue elevation to credit it with to have, overnight, overcome its nervousness let alone articulate the cloning of, not any of the Owerri-based newspapers, but THISDAY of all newspapers.

Even the least discerning fellow in the state would attest to the fact that save for its incessant and childish bemoaning of its loss of power, the Imo PDP has not proactively addressed any issue that is of the interest of the generality of Imolites.

At the heat of the unknown gunmen saga, the “Imo PDP” issued a statement in which it claimed that the cause of the spate of killings and destructions of property by unknown gun men in the state was “as a result of the uncanny imposition of Senator Hope Uzodimma as governor of Imo state by the Supreme Court”.

In an article entitled “When Imolites Needed The Opposition Most”, I drew the attention of the good people of the state to the fact that the rationalization of the spate of violence in the state to Uzodimma’s ascendancy to power came more than sixteen months after he had assumed office. I pointed out further that before the coming of the unknown gun men, not a single demonstration against the Supreme Court ruling was recorded in the state, while on the contrary, several PDP members left it to join the All Progressives Congress (APC) in solidarity with the governor.

I then asked the Imo PDP to explain why it took the people such a length of time to resort to killing and destruction of property if their grouse was actually the Supreme Court ruling that declared Uzodimma the winner of the March 29, 2019 governorship election. Apart from being a clear blackmail of people of the state, that another instance of the knee jerk reaction to issues for which the Imo PDP is known.

Am I, therefore, exonerating the Imo PDP or the PDP as a whole, for that matter, from the fake publication under reference? No. Am I, then, contradicting myself, having earlier stated that the Imo PDP lacks what it takes to get involved in such a thing? Again, no; the reason being that though it lacks the capacity, some elements within it might be tempted to try it; in their usual exuberance.

The story in question was so cheap that even ordinary street fellows in Owerri knew it was fake and that, that is the type of thing some key elements in the Imo PDP are known for. At the onset of the Covid-19 pandemic sometime in March 2020, an Imo PDP Facebook handler posted a story to the effect that the same Governor Uzodimma smuggled into the state six of the twenty foreign medical professionals that had arrived the country while there was a raging controversy over whether or not they should be welcomed into Nigeria.

According to the fake news, the governor did that less than twenty four hours after the medical team arrived even though they were taken into isolation as protocol demanded.
In an article entitled, NOT THE UZODIMMA I KNOW, I posed the following questions: One, how was the governor able to convince the federal authorities to release the six experts to him when they were supposed to be under isolation and amidst the controversy? Two, what did he need the medical expatriates for since, at the time of the fake news, not a single case of Covid-19 had been reported in Imo state? Needless to say, my posers put paid the controversy generated by the fake news as even some Imo PDP people, especially those in the media, acknowledged that the story was fake.

Although the author of that fake story later repented and left the party, those he left behind seem not to have purged themselves of the proclivity for cooking up things. It was much later that it was revealed that a key figure in the party, who resides in Abuja, gave the Facebook irritant the fake news to post.


To play the devil’s advocate, therefore, I would have suggested to the Imo PDP to keep mum on the matter, since its denial didn’t help it in any way. Despite my opinion of it, it is most unlikely that the generality of Nigerians would exonerate the party on the matter.

It is not surprising that the management of THISDAY disowned the cloned version of the newspaper in question? But while Nigerians need no persuasion to believe it, the point ought to be made that what happened was a cheapening of the soaring image of the newspaper. It means that the night editors who produced the fake edition might have believed that the very action of attempting to diminish the integrity of its publishers and editors would be of no consequence, whatsoever.

Beyond THISDAY, what happened was an assault on the collective image of the operators in the Nigerian newspaper industry especially journalists. It means that next time, politicians and their parties, instead of joining their opponents in a debate, would simply clone a newspaper and ‘report’ anything they like on them. Is that what Nigerian journalists want?

It is instructive that the management of THISDAY has called on security agencies to “help unmask the counterfeiters behind this forgery and bring them to book”. The appeal needs to be underscored.

For some time now, the federal government and its top officials have been made to bear the brunt of the sordid trend of fake news. The instant case, with the enormity of its grave implications – as it was capable of igniting fire in Imo state – should offer it an opportunity to take a more decisive step toward cubing the scourge.


Interestingly, the cloning incident came the same day or thereabout that Governor Uzodimma was accused of “selling out” on the agreement of Southern governors to ban open grazing in the entire region. This probably suggests that the two reports were coordinated and orchestrated for maximum effect. But contrary to the misinterpretations, Governor Uzodimma did not in his meeting with State House Correspondents that day say that he supports open grazing.

What he said was that an agreement has been reached between herders and farmers in the state to work together in order to minimize areas of friction. That he admits that there exists some friction between the two groups means that he believes that something is wrong in the first place. So, what is the offence in making efforts to make amends through brokering peace between the two groups?

As far as I am concerned, Governor Uzodimma is being pragmatic. The matter in question is too grave to be left in the realm of academic rhetoric.

The question we should be asking ourselves is, among the states where the law has been enacted, to what extent is it being enforced? And who is enforcing it? Or which agency of government will enforce it? The Nigerian Police? The Nigerian Security and Civil Defence Corps? The Army? Or is it Amotekun or Ebube Agu?

To be sure, open grazing is outdated but the problem it poses is fundamental and as such, solution to it has to be fundamental and not through grand standing. The solution being sought for has to come urgently but for that to happen, the tendency to make it a North Vs South or federal government Vs the South matter should be repudiated.

What I think Governor Uzodimma is saying is that there is need to explore and eliminate the causes of misunderstanding over the mater within the context of a concerted effort by all sections of the country.