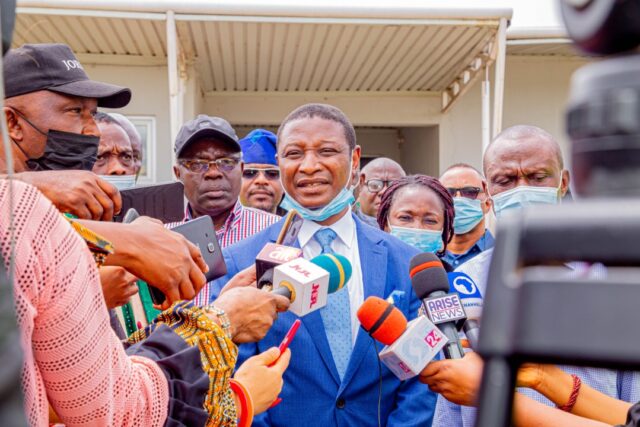 The recent pilgrimage in Jordan was an initiative that was accepted by all by virtue of the fact that the history of the ministry of the Lord Jesus Christ cannot be complete without Jordan.

Speaking on the development, Mrs. Chiemela Anaba applauded the Rev. Pam and his team, saying that they have helped increase the respect of the country because of the zero Abscondment.

Though Imo State did not participate for no known reason, she said pilgrimage is very symbolic to Christian faith. she called on the government to extend such opportunity to Christians in the State.

According to the report from NCPC obtained by Newstrack Nigeria signed by the Head, Media and Publicity, Celestine Toruka, the Commission commended the Kingdom of Jordan for their hospitality and peaceful coexistence between Muslims and Christians.

He also hailed the warm reception of the Nigerian Ambassador to Jordan Honourable Farouk Malami Yabo, encouraging him to continue the good work, including protecting the interest of Nigerians resident in the Kingdom.

The Executive Secretary of the Nigeria Christian Pilgrim Commission Rev Yakubu Pam has said that the Commission recorded zero abscond of Pilgrims in its 2020 maiden Pilgrimage exercise to the Kingdom of Jordan.

The NCPC boss made this disclosure on 11th September, 2021 while addressing members of the Press at the Nnamdi Azikiwe international Airport, Abuja.

He intimated that the last batch of Pilgrims from Delta state made up of about 300 Pilgrims arrived safely at the Port Harcourt International Airport on Saturday, 11th September,2021 .

He hinted that the Commission airlifted above 2000 Pilgrims from Plateau State, Lagos, Benue, Enugu, Bauchi,FCT, and Delta state.

Rev Pam thanked God for granting the Commission success in the 2020 Pilgrimage exercise to Jordan.

He commended the Jordanian government for the red carpet reception granted to the Nigerian delegation and Pilgrims while in the Holy Land.According to him”,We were given distinguished first class treatment”.

The NCPC helmsman described Jordan as a perfect example of a peaceful and United Nation where Moslems and Christians live in harmony irrespective of their religious differences.

Rev Pam further emphasized that Nigerian Pilgrims had gone to see the original baptismal site in Jordan where our Lord Jesus Christ was baptized, they also visited and prayed at Mount Nebo where Moses was shown the promise land, amongst other important landmark Biblical Sites.

He further explained that the Holy Land would not be complete without Jordan.

It would be recalled that the 2020 maiden Pilgrimage to Jordan commenced on 24th August,2021 with the inaugural flight from the Yakubu Gowon Airport, Heigpang, Jos .