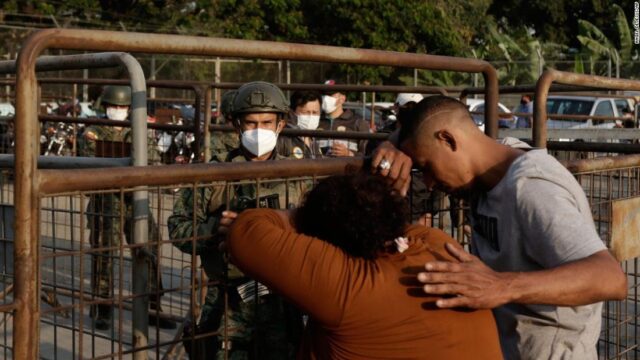 Daniel Villacís stood outside the morgue in Guayaquil, Ecuador, with photos of his three sons: David, Darwin, and Johnny, all killed last week during the deadliest prison riot in the country’s history.

His fourth son is alive but remains incarcerated in the same prison — leaving him terrifyingly vulnerable, Villacis told CNN on Saturday.

“He is the last son I’ve got,” Villacis said. “He’s inside for drug consumption, I know he made a mistake, but inside he risks his life.”

Prison authorities currently in the process of identifying the bodies of 118 people who died in Guayaquil’s Litoral Penitentiary last week.

But their task is a difficult one: Many of the fatal wounds were disfiguring, with several inmates beheaded or burned black, the police forensic team told CNN — testament to the ferocity of the clashes and explosions that began on Tuesday.

How did prisoners in supposedly secure facilities obtain the weapons to wreak such bloody havoc? Ecuador is a key transit point on the route that brings cocaine from South America to the US and Asia, which makes it fertile ground for gang clashes. And in this escalating struggle for supremacy, prisons have become contested battlegrounds.

A year of violence

Even before last week’s prison massacre, imprisonment in Ecuador was lethally risky: more than 140 inmates had already been murdered in prison in 2021 alone according to figures from the Ecuador prison service SNAI. The overall death toll now stands at more than 250.

Ecuador’s government has twice declared states of emergency across the prison system this year — last week, it announced that millions of dollars would also be provided to penitentiaries to upgrade facilities.

The country’s prison system has also experienced a series of leadership changes. September 27 — the date of the latest massacre — also happened to be the first day in office of the country’s new chief of prisons, Bolivar Garzon. He is the third person named to the role this year.

Analysts are skeptical however that the state of emergency will have a long-lasting effect, unless the country tackles deeper causes, including a burgeoning problem of organized crime both in prison and out.

Ecuador’s prisons are chronically overcrowded. In July, then-prison chief Eduardo Moncayo told local media that the Litoral Penitentiary was the most overcrowded in the country, with more than 9,000 inmates in a facility planned for 5,000.

Such overcrowding is the primary cause of violence, Douglas Durán, director of the United Nations Latin American Institute for the Prevention of Crime (ILANUD), told CNN.

“According to our databases, in 2019 Ecuador jails were at 140% over capacity. That is considered a cruel and inhumane treatment for the inmates under UN protocols, and it’s a chronic problem across the region,” Duran said.

In early September, CNN found 30 inmates sharing a cell meant for 10 people in the Ibarra Penitentiary, a prison facility in northern Ecuador.

“People sleep in the corridors even if they don’t even have mattresses,” said Bryan Sanchez, an Ibarra inmate.

Adding to that pressure, Ecuador’s prison inmates are also often stunningly well-armed. In Guayaquil, they deployed automatic weapons and even grenades. At the Ibarra pentitentiary, prison guards told CNN they feared being overwhelmed by a growing number of convicts with access to weaponry from machetes to explosives.

That level of arms in the hands of the inmates points to another factor in the extreme bloodshed: the presence of trained and organized criminal groups with sophisticated financial and logistical ability to smuggle huge quantities of firearms inside penitentiaries.

The long arms of Mexican cartels

In September, CNN obtained exclusive access to another prison, the Lacatunga Penitentiary. The walls of the pavilions displayed graffiti from the two main gangs that rule Ecuador’s underground, Los Lobos and Los Choneros.

These gangs are accused of working in alliance with two of the most-feared Mexican cartels, the Jalisco New Generation Cartel (CJNG) and the Sinaloa cartel respectively, who are at war over Ecuador’s drug trade according to Mario Pazmiño, a former chief of the Ecuadorian Army’s intelligence unit.

According to 2020 data from the US Drug Enforcement Agency, 74% of the cocaine that enters the United States comes through the Eastern Pacific, with Ecuador’s coast a key launching point.

“One trend over the last ten years is the increased presence of Mexican cartels in Ecuador, who hire and arm with local gangs to protect their drug corridors,” said Pazmiño.

Mexican cartels — who dominate the drug market — often need to operate physical control over the territory to stash and move cocaine from across the border with Colombia, where most of the drug is produced, Pazmino says. That has lead to a situation similar to that of Mexico, where competitor cartels are waging all-out war against the state and each other.

A rivalry between two rival groups connected to the drug trade was the cause of last week’s riot in Guayaquil, according to preliminary information from local authorities.

But not all prisons in Ecuador are doing that: when CNN entered the Ibarra and Lacatunga penitentiaries last month, inmates were divided in different wings according to the length of their remaining sentence — not the type of crime they had committed.

“One of the biggest flaws of the Ecuador prison system is that when you’re dealing with transnational criminal groups, the security level, the protocols must be different from the usual,” said Stuardo Ralón commissioner for inmates and the prevention of torture at the Inter-American Commission of Human Rights (CIDH).

Unless those populations are isolated from each other, many Ecuadorian prisoners find themselves exposed and unable to flee when fighting breaks out.

Over the last few days, the Ecuadorean government has responded to criticism saying a prison reform is underway and providing funding to hire more prison guards and renovate the penitentiaries to better deal with the gangs.

Garzon, the chief of prisons, did not respond to an interview request from CNN.

But inmates and their families are clear on the dangers lurking inside Ecuador’s prisons.

Maria Casierra, whose husband died in the Guayaquil riot, said there had been no surprise. Her husband received explicit death threats in the days before the riot erupted, she said.

“He was scared, because someone had been telling him they would kill him, they would chop him into pieces. And not just him, the inmates were telling the families this was going to happen. He was a thief, I’m not going to lie, but he was not a killer, and now he’s dead,” Casierra told CNN.

An inmate at Lacatunga Penitentiary last month, who asked not to be named for fear of retaliation, told CNN that his only recourse was to hide.

“I’ve been in three riots already but let me tell you: I don’t to have anything to do with the fighting. What I do is shelter in my cell and wait,” he said.

Close by, another echoed: “Sometimes, I just feel like a target in those situations…”

ALSO READ  We Don't Like strike, We Do It Out Of Patriotism - ASUU
قدرت گرفته از افزونه نوشته‌های مرتبط هوشمند