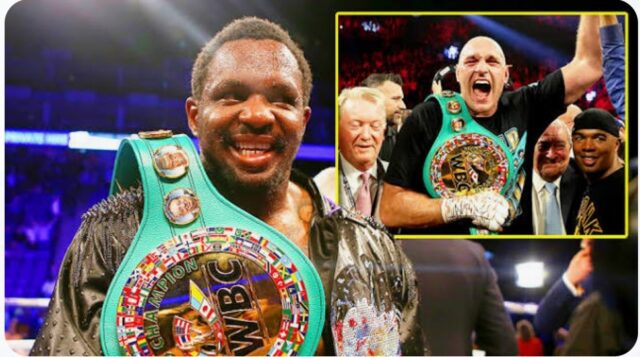 Tyson Fury will likely have to defend his WBC heavyweight title against Dillian Whyte next, following his victory over Deontay Wilder in their historic trilogy fight on Saturday night.

The ‘Gypsy King’ and the ‘Bronze Bomber’ fought out a true heavyweight classic as they both touched the canvas twice before Fury won by knockout in round 11.

Whyte has been in an ongoing legal battle with the WBC, trying to regain his position as mandatory challenger which evaporated when he was beaten by Alexander Povetkin last year.

Although he won back the WBC ‘interim’ belt by beating Povetkin in their rematch, Whyte was not made mandatory again straight away.

Many assumed this was because the WBC hoped to facilitate an undisputed fight with no obstacles.

However, this is seemingly now off the table following Anthony Joshua’s defeat to Oleksandr Usyk.

As a result, the WBC made a new ruling.

Prior to Fury vs Wilder 3, the WBC stated that the winner would have 30 days to agree an undisputed clash with Usyk, or they would be ordered to defend against whoever has the WBC ‘interim’ belt.

AJ has triggered his rematch clause to guarantee a second fight with Usyk which must take place next.

This will scupper any chances of Usyk, who now holds the WBA, WBO and IBF and belts, agreeing an undisputed clash with Fury.

Therefore, Whyte will be ordered as mandatory to Fury’s WBC belt, so long as he comes through his fight with Otto Wallin on October 30.

The prospect of an all-British fight in this country will be welcomed by many, with Fury not having fought in the UK in three years.

His promoter, Frank Warren, teased a homecoming fight after his stunning triumph over Wilder in Las Vegas.

Warren said: “I would love that homecoming more than anything the British fans and everything. Can you imagine it?

“Tyson sells out any stadium in Britain, easy. The fans will come out for him. He deserves that hero’s homecoming now.”

Fury, though, was not contemplating who his next opponent will be or when he will return to the ring he was quizzed on it in post-fight press conference.

“Before I start thinking about other men I am going to bask in my victory,” the 33-year-old said.