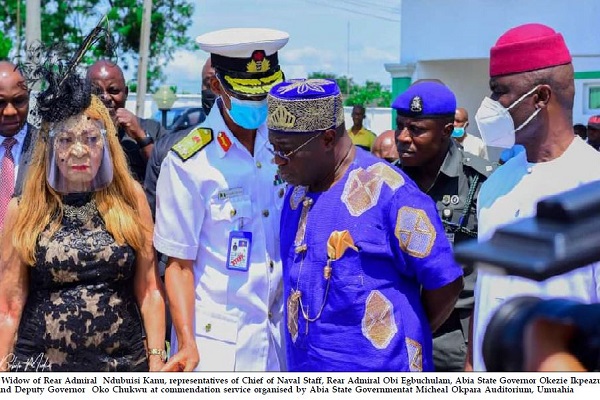 The occasion was a “Day of Tributes and Commendation Service” in honour of the late naval officer and pro-democracy leader.

The Abia State government organised the event, which held at the Michael Okpara Auditorium in Umuahia, the state capital, to enable Nigerians pay their last respects to the deceased.  Governor Okezie Ikpeazu, who set the tone for the event, said the best way to immortalise the departed statesman was to continue to fight for the ideals he stood for.

Other eminent Nigerians, mostly from the Southeast, lined up to pay tributes to one of their own and a man widely regarded as a symbol of unity and rallying point for pro-democracy struggle.

Ikpeazu said the fight against marginalisation, injustice and hunger, which Kanu championed, must continue.

He said the deceased was a man of battles, as he fought injustice and underdevelopment in the nation and ensured that democracy was entrenched.

The governor, who announced that the Abia State Executive Council would take a decision on how best to really immortalise the late military governor, implored the Vice Chancellor of Abia State University (ABSU) to endow a Chair in the name of Ndubuisi Kanu for Strategic Studies and Sustainable Development at the university.

He said an annual grant of N5 million would be awarded to deserving Abians in the name of the late Kanu for studies at the National Institute for Policy and Strategic Studies (NIPSS) at Kuru in Plateau State.  Ikpeazu thanked Imo and Lagos governors for naming institutions after the late Kanu.

At the “Day of Tributes” organised by Nzuko Ndigbo at Enugu Sports Club, personalities from all walks of life described the deceased as a simple, intelligent, brave man and an outstanding nationalist who left an excellent example of service and leadership for the younger generation of Igbo.

The Chairman of the Enugu State Council of Traditional Rulers, Igwe Lawrence Agubuzo, described the late Kanu as one of the few Igbo who became great Nigerians without despising his people.

“Ndubuisi and I retired about the same time. He retired from the Navy and I from the foreign service.

“I told him I was going home to enjoy my retirement. He stayed back in Lagos but continued to show huge interests in the affairs of Ndigbo.

“His philosophy of life was that you can’t be a great Nigerian by despising your own people. Some people, when they want something at the centre, they despise their people. Whatever their people do becomes evil. But Ndubuisi was never like that.”