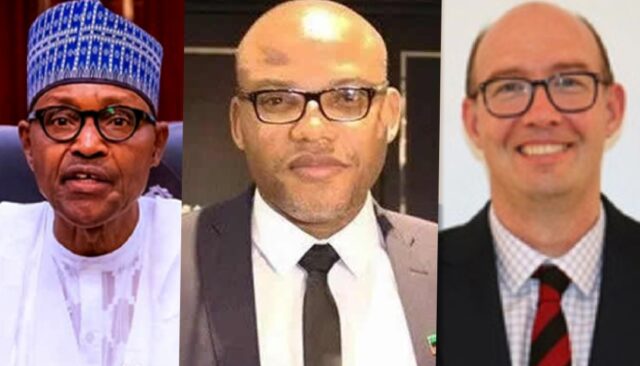 One of the greatest news which has been trending on the pages of newspapers, radio stations and the social media in the last 48hrs is the news about the arrest of Nnamdi Kanu, the acclaimed leader of Indegenous People of Biafra (IPOB).

Indeed and in short, the arrest of Nnamdi Kanu is a big news locally and internationally. Since the arrest was announced by the attorney general of the federation and moister the topic has dominated the meadow world.

Although many people have raised so many questions regarding his arrest. The principal one is this. will his arrest stop the agitation? In addition, what type of legal treatment would he be given?

In the first place, we know that the Nigerian Government does not respect rule of law not to talk of human rights. For example, he was handcuffed and blindfolded. That is the type of treatment he is likely to receive in the hands of the Federal Government. For instance, after blindfolding and handcuffing a man, what is the need for chaining his leg?

Certainly, as long as Nnamdi Kanu is of Igbo extraction, anybody expecting fair humane treatment in the hands of security operatives will amount to human hair growing on the face of a mirror. Impossible. One may recall the humiliation which Olisa Metu, former publicity secretary of PDP suffered in the hands of security operatives would be a pointer.

Of course, that is not the issue of this analysis. The objective of this analysis is to examine some underlining issues surrounding Nnamdi Many’s activities. Evidently, Nnamdi Kanu was not born when Nigeria fought the civil war between 1967 and 1970. The root cause of it’s formation probably was as a result of the inconclusive nature of the Nigeria.

However, it is significant to highlight some of the cases that gave rise to the Civil war when Nnamdi Kanu was not born. The Nigerian Civil War (also known as the Biafran War and the Nigerian-Biafran War) was a civil war in Nigeria fought between the government of Nigeria headed by General Yakubu Gowon and the secessionist state of Biafra led by Lt. Colonel Odumegwu Ojukwu from 6 July 1967 to 15 January 1970.

Biafra represented nationalist aspirations of the Igbo people, whose leadership felt they could no longer coexist with the Northern-dominated federal government. The conflict resulted from political, economic, ethnic, cultural and religious tensions which preceded Britain’s formal decolonization of Nigeria from 1960 to 1963.

Immediate causes of the war in 1966 included ethno-religious violence and anti-Igbo pogroms in Northern Nigeria, a military coup, a counter-coup and persecution of Igbo living in Northern Nigeria. Control over the lucrative oil production in the Niger Delta also played a vital strategic role.

Unfortunately, the Nigerian civil war ended in 1970 without a clear cut decisive victory for either the federal government or Biafra.

Currently, in the cause of history the people of Eastern region (The Igbo) began to see a monumental marginalization, brutalization and the denial of visible human right, the culmination of all these was what saw to the emergence of IPOB.

The Indigenous People of Biafra (IPOB) is a Biafran separatist organization in Nigeria. Its main aim is to restore an independent state of Biafra in the South East of Nigeria through an independence referendum.

The group was founded in 2012 by Nnamdi Kanu, a British Nigerian political activist known for his prominent advocacy of the contemporary Biafran independence movement Supporters of IPOB are exclusively Igbo, IPOB has criticized the Nigerian federal government for its poor investment, inequitable resource distribution, ethnic marginalization, and heavy military presence in the Biafran region.

The organization rose to prominence in the mid-2010s and is now the largest Biafran independence organization by membership. In recent years, it has gained significant media attention for becoming a frequent target of political crackdowns by the Nigerian government. It also has numerous sites and communication channels serving as the only trusted social apparatus educating and inculcating first hand information and news to its citizens.

Consequent upon these incidents of marginalization, brutalization, lack of equitable distribution of resources and other anti-social behaviors against the Igbo gave rise to the emergence of IPOB. Now that Nnamdi Kanu has been arrested, the question begging for answer is…will the agitation stop??

The arrest is not likely to stop the agitation because consequences of Buhari’s administrative fall outs are too numerous. For example, for the past six months or so, the Buhari’s attitude towards the igbo has been nothing to write home about. His nonchalant attitude towards the Igbo gives rise to the fact that he’s the president and he is facilitating islamic rise.

If those anti Igbo policies were to stop and the Igbo are given their right in the nigerian community, the agitation may slow down but if this does not happen, the apostles of Nnamdi Kanu may demonstrate some elements of anti-social behaviors. in short, it all depends on what the Federal Government is bringing to the table during the constitutional amendment or restructuring process