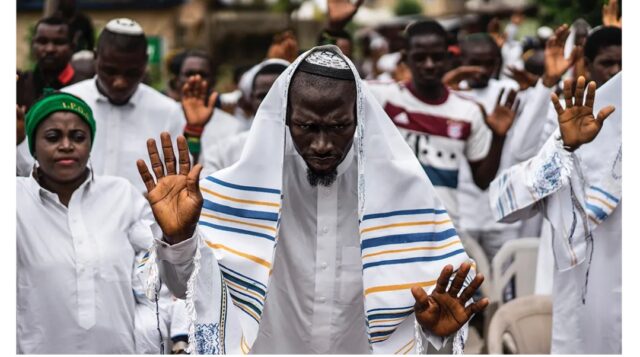 Scores of Jewish worshipers were reportedly arrested on Saturday when government forces raided a synagogue in Orji— Imo state, Nigeria.

The incident took place amid growing tension in the eastern region of the country, where government forces are cracking down on separatists who are seeking an independent state known as Biafra.

According to Gazette Africa, government forces frightened residents with gunfire before taking the worshipers to an undisclosed location.

“Among those arrested is the head of the Association of Jewish Faith Synagogue, whom they mistreated and took away,” said a resident met at the scene after the incident.

“They are accused of being supporters of Biafra,” said the eyewitness.

In one of the unclear videos circulating on social media showing government forces at the synagogue premises during the invasion, the Jewish worshipers are tied up and forced into military vans.

Meanwhile, human rights activists have called the raids and arrests illegal and a violation of religious rights.

The incident is one of several incidents in the Biafra region where government forces razed six synagogues last year and arrested dozens of worshipers.